Over 20 teachers of G-NET network met in the Universidad Católica de Temuco, Chile, from the 30th of November to the 4th of December of 2015 in the TrainingLab. They ended up the preparation of the teaching materials and the methodology that will be used to deliver the training courses about gender equality and European integration in the 6 countries of Latin America and Europe since February 2016. 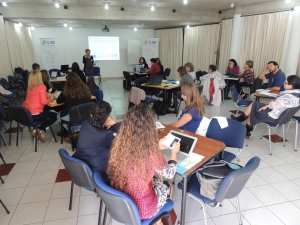 The universities members of the network will implement their formative workshops about gender equality and European integration during the year 2016. The contents have been designed in a collaborative system during the first part of the project. The university professors that elaborated the documents met in Temuco, Chile, to train each other in the issues that will be delivered in the courses. That makes the G-NET teaching staff capable to provide training to the students, researchers and other stakeholders in six different countries: Chile, Argentina, Guatemala, Costa Rica, Germany and Spain.

The sessions will address different issues from the gender perspective: the process of European and Latin-American integration, social inclusion, science, education, diversity and intersectionality, and gender violence, amongst others. Moreover, the staff who will deliver the courses has been trained on the using of teaching tools in the clasroom and online.

María Inés Salamanca, coordinator of UN Women Chile, was invited to the opening session of the Training Lab. She explained the work of the organization to achieve full equality between men and women and the collaboration of the European Union. She identified as well those aspects that will have to be tackled over the following years: gender violence against women and girls, child marriage, the access to a decent job, the gender gap, and the access to the energy and combustible, among others. The conference attendees expressed their concern about the feminicides and how to reduce the number of women killed in Latin America and Europe.

Furthermore, international conferences were held in the framework of the TrainingLab. The conferences addressed the gender perspective in Chile institutions, women rights in the family level and the gender perspective in de ethnic diversity. Professors from Chilean universities as well as some members of the G-NET project were invited to deliver their communications.