International seminar and training for the consortium in Chile

International seminar and training for the consortium in Chile

G-NET network organizes a training week about gender and integration processes that combines lectures opened to the public, with workshops for the project consortium. It will take place from the 30th of November to the 4th of December, in the Universidad Católica de Temuco, Chile. 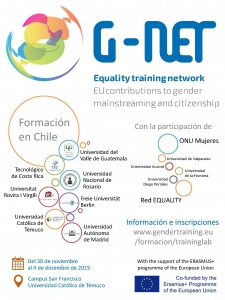 The lectures opened to the public are:

These lectures will take place in the Auditorium of Campus San Francisco and previous registration by email will be needed. Send expressions of interest to Mónica Baeza (mbaeza@uct.cl) and Alberto Olivares (alberto.olivares@uct.cl).

The remaining sessions will be part of the Training Lab, a program aiming to build capacities among the G-NET team, to consolidate the different training activities expected to deliver in 2016 and 2017. The TrainingLab will be focused on the content of the courses to be delivered in the universities of the network. It will strengthen as well knowledge for on-line teaching.

Further information about the TrainingLab that will be held in Chile in the event website www.gendertraining.eu/formacion/traininglab/ (in Spanish).

This website uses cookies to improve your experience while you navigate through the website. Out of these, the cookies that are categorized as necessary are stored on your browser as they are essential for the working of basic functionalities of the website. We also use third-party cookies that help us analyze and understand how you use this website. These cookies will be stored in your browser only with your consent. You also have the option to opt-out of these cookies. But opting out of some of these cookies may affect your browsing experience.
Necessary Always Enabled
Necessary cookies are absolutely essential for the website to function properly. This category only includes cookies that ensures basic functionalities and security features of the website. These cookies do not store any personal information.
Non-necessary
Any cookies that may not be particularly necessary for the website to function and is used specifically to collect user personal data via analytics, ads, other embedded contents are termed as non-necessary cookies. It is mandatory to procure user consent prior to running these cookies on your website.
SAVE & ACCEPT